Dive In and Experience the Magnificent Caribbean Sperm Whale 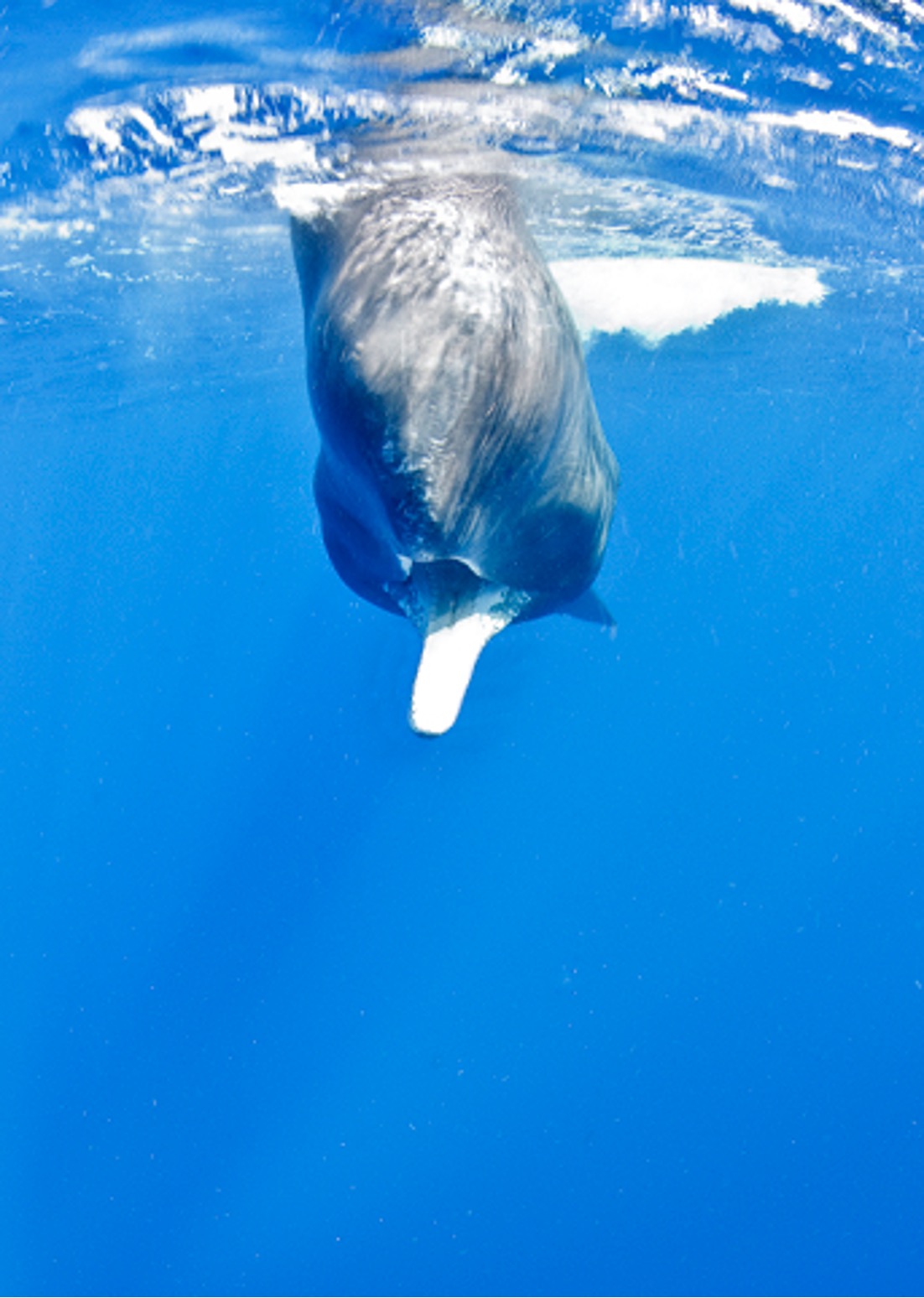 Aspirations of a Little Boy

As little boys growing up on the water’s edge on Dominica’s west coast, we would see the humpback whales pass through on their annual migration. From those early days, I had the feeling that I could jump in and swim with them… BE with them!

The Whales Become Our Neighbours

Later, as my life turned toward the sea, it dawned on me that the whales we saw way out at sea were different creatures altogether. The humpbacks seemed constantly in motion, like they had to get somewhere on time. They were frequently seen close to shore in shallow waters. The sperm whales, on the other hand, would come to the surface and sit there, hardly moving, just blowing out their tilted plumes of water, for about ten minutes …. like smoking logs. Then they would start moving slowly and fluke up before descending into the depth. We started whale-watching and studying these animals who basically were our neighbours… and it was, and still is, an amazing journey. 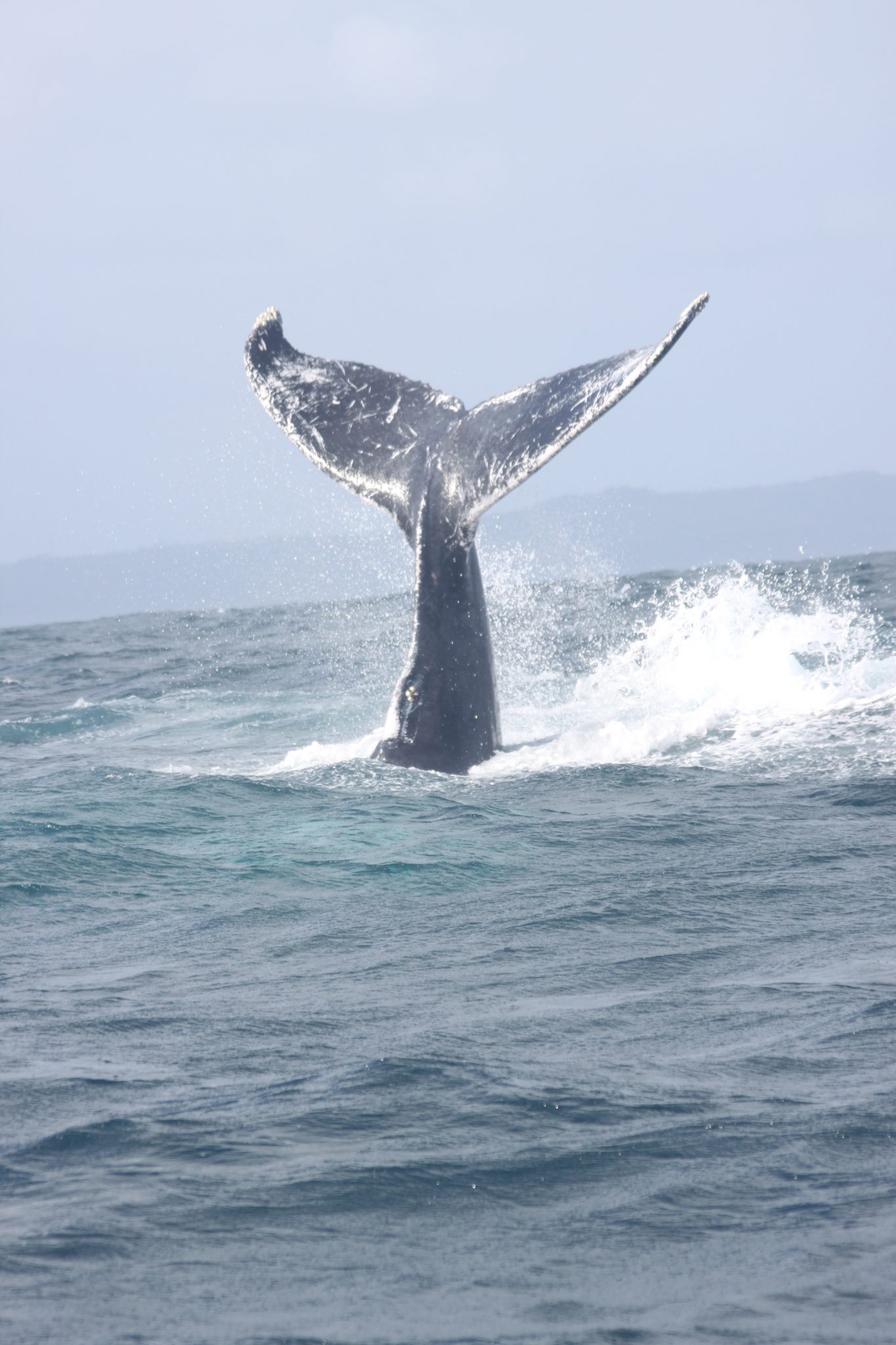 A View Inside the Head of the Sperm Whale

Maybe the most interesting feature of the sperm whale is its head, hence its latin name, Physeter Macrophalus (macro – large, phallus – head). Inside the head is the world’s most sophisticated echo location system. Not only that, but they also have the largest brain in the animal kingdom. Interestingly, the section devoted to speech is 4 to 5 times larger than in a human. So, in a strange way, we can say that the whales talk AND that they have their own dialect… a Caribbean dialect!

Different hypotheses have been brought forward to explain such a large head, such as assisting in regulating buoyancy during its deep dives it does every hour. However, we now know that the principal purpose of the large head is to make and receive sounds. That’s all! 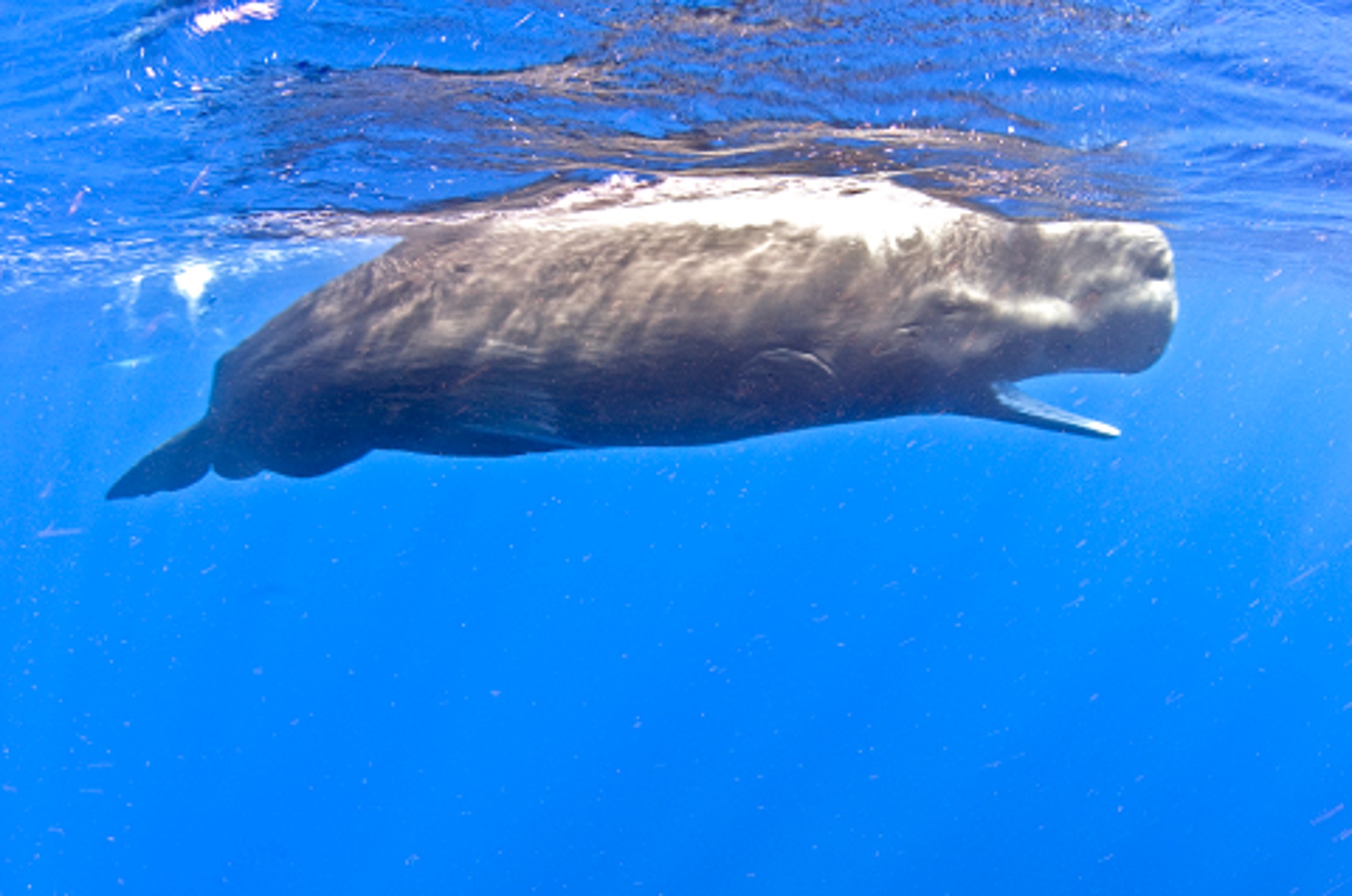 Did You Know That Sperm Whales Talk to Each Other?

In the early days we would dive into the water every couple miles to listen for whales. In those early days we were our own hydrophones. Now we have state of the art hydrophones that can detect the sound of whales from up to ten miles away.  The sperm whales have two distinct kinds of sounds: foraging or feeding clicks, and socializing click combinations called codas. The foraging clicks are emitted most of the time, each whale emits a click every half a second or so. They would start off slowly and within a minute or two, steady down to the half second rate. In this way, a group of sperm whales sound like horses galloping on a hard surface and many groups sound like popcorn.

>>> Experience and Explore the Amazing Island of Dominica <<<

The other type of sounds, codas, are made primarily when the whales are on the surface and within a small area, socializing. At these times, a multiplicity of combinations of clicks can be heard. We had the privilege of working alongside IFAW’s Song Of The Whale as early as the 1980s and they formally recognized the 2 + 3 or 1 + 1 + 3 combination of clicks as the most frequent combination of clicks made by the whales off Dominica. Clack ..clack ….clack, clack, clack, 30 plus years later, is still the Caribbean sperm whales identity call.  When we hear those sounds, we know that these are most likely whales we know and more importantly, they know us in and out of the water.

The Caribbean Islands from Tobago to the Montserrat form an arc, a bit like a sliver of a fingernail. This is where the Atlantic and Caribbean tectonic plates collide and have created, and still creating, our beautiful islands. To our west, we have an area of deep water that has created an ideal feeding ground for our Caribbean acoustic clan of Sperm Whales. An acoustic clan is made up of a number of groups of sperm whales that “speak the same language”.

It feels like yesterday when we started swimming, observing and interacting with these whales. So, after all these years, we now have animals who have grown up with us being around them, and some of them seem to enjoy and actually seek out our company in the water.  They are like my family.

An Unforgettable Experience to Make Your Scream With Joy

Last season, my epic swimming session occurred when one friendly female came right up to the boat with five males of various ages in tow. It reminded me of a dog on heat and I immediately got to swim with my clients and myself in the water. After all these years, one of “our girls” was coming of age and that childhood feeling of being among them came right back. I put those long free diving fins to work and positioned myself right in front of the oncoming group and then let them catch up to me .  As they start passing me …. there are whales to the left, to the right, below and behind, with the whales touching distance away.

When I dive to get a closer look at some intense action a whale takes my spot and is now above me. I instinctively stop moving and, almost motionless, see over a hundred tons of whales pass by me. You can see the flexing and easing of the muscles but most spectacular was all five penises extended and dangling with the moving whales. But before I can exhale, I see those tails, the business end of a whales’ defenses passing by. Its only after they pass I can head to the surface to breathe….. and let off a scream of joy. This was a truly exceptional experience!

Dominica is the Ideal Location for Whale Watching

Dominica, with sperm whales close to shore, warm weather and relatively calm seas, is an ideal location to observe and research whales. Ongoing work in this regard is focusing on the sounds made by these whales and what they mean. I guess we will not have exact translations from Sperm Whalese to English, but as we study these animals we will associate specific behaviours followed by specific coda click combinations. For example, we now know that 4 clicks indicate that the group has finished re-oxygenating and will soon dive.

Whale Watching is a Once in a Lifetime Experience

There are so few people who will get a chance to experience observing and swimming with Caribbean Sperm Whales. This is now a part of what I am about – sharing these epic moments with the world. I definitely recommend every person living in or visiting the Caribbean to experience the joy of whale watching at least once in their lifetime. And come to Dominica where you’re sure to catch a glimpse of these majestic and magnificent creatures on any whale-watching journey.

Watch this Video of the Whale Whisperer

In Dominica We Do Whale Watching Responsibly

Many are concerned about the human interaction with the whales adversely affecting these sensitive creatures. Have no fear. Whale watching is now regulated by Government of Dominica’s Fisheries Division. The program is set up in a responsible manner and to have as little negative impact on the animals as possible. In this way, there will always be more demand than supply of swimming of sperm whales in Dominica.

For most people a good afternoon out with the whales on a boat-based excursion is a perfect way to get close to these animals. These trips now start from both Roseau and Portsmouth. 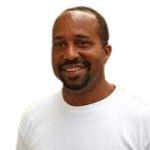 Andrew Armour, also dubbed Dominica’s Sperm Whale Whisperer, pioneered whale watching in Dominica and this part of the world and more particularly, took the swim with the whales in Dominica to the world. He grew up in Dominica swimming, fishing, scuba diving, waterskiing, snorkeling and travelling among the islands by boat. 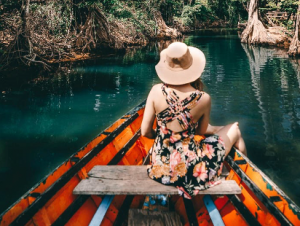 Experience and Explore the Amazing Island of Dominica 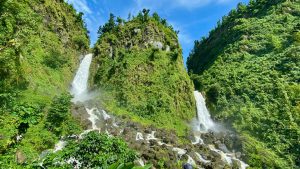 The Commonwealth of Dominica – a Gem of the Caribbean 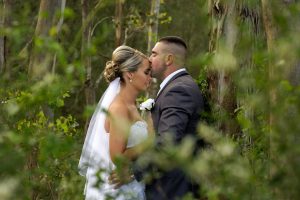