The Steelpan is Truly Caribbean – Hear its Amazing Story.

Bass Man by the Mighty Shadow

These are the words of the Mighty Shadow; words that vividly describe the hold that the steelpan has on you. You don’t want to sing but you have to; you don’t want to dance but steelpan music puts you in a trance and you have no choice but to dance. The musical vibrations and rhythms created by stick and steel are uniquely Caribbean. And it’s not just about an instrument; it’s about the people behind the pan. There’s a blurred line between individual and instrument. The steelpannist is just as critical as the steelpan itself.

It is estimated that only 1% of people on earth have heard of the steelpan / steel drum and even fewer have had the privilege of hearing the sweet sounds of this fantastic musical instrument?

Origins of the Steelpan

But like most Trinidadians (fondly known as Trinis), we did not let a good thing go to waste. These oil drums were then cut, shaped, tuned and transformed into the exceptional musical instrument that is the steelpan/steel drum.

What is the Steelpan?

Using words to describe the steelpan cannot substitute for seeing and experiencing the real thing.

The oil drums are cut into different heights to create a variety of sounds. Shorter pans are used to create the higher tenor notes while the deep drums give you the bass. And there are many versions in between. First there is the tenor, then the double tenor, double second, double guitar, cello, tenor bass, and six bass; each providing a unique sound that when blended together creates an orchestra like no other. Listen to the sounds of soca and calypso. From contemporary music to your favourite classical pieces, the steelpan can do it all.

The Only Musical Instrument Created in the 20th Century

So unique is the steelpan, that it is widely regarded as the only major musical instrument to be invented in the 20th century. The twin-island republic of Trinidad and Tobago is known for its exceptional talent and exceptional people. This is another one of the small islands’ great feats – creating the only new musical instrument to emerge in the 20th century.

The Man Behind the Pan

No one person can lay claim to the development of the steelpan as it is today. However, birth of steelpan can be attributed to Winston Spree Simon, a musical pioneer from Laventille (one of the humblest villages in Trinidad). And while Winston invented the ping pong pan which evolved into the steelpan, there are many others who have contributed to steelpan’s development over the years. People like Anthony Williams, Bertram Marshall, Rudolph Charles, and Ellie Mannette have significantly impacted the evolution of the steelpan.

Williams, Mannette and Simon were all part of the Trinidad All Steel Percussion Orchestra (TASPO) a band which was formed in 1951and that was selected to go to Great Britain and perform. This performance brought international recognition and legitimised the artform of the steelpan.

Learn How the Steelpan is Made and Tuned by Hand

Can Anything Good Come From Laventille?

Yes! Did you know that some of the most prominent figures in pan come from Laventille? Laventille is considered a ‘lower class’ neighbourhood in Trinidad and is known for its high crime rates. But Laventille is also the birthplace of steelpan and it is the birthplace of pan pioneers and world-renowned tuners like the late Rudolph Charles, Bertie Marshall and Winston Spree.

Laventille is also home to some of the top steel bands such as the Desperadoes Steel Orchestra, Renegades as well as All Stars that was started by Bertie Marshall and Rudolph Charles.

Music is in their DNA

While the steelpan has its origins in the oil and energy sector, it is not the energy of the oil that has fueled the success of the Steelpan. Rather, it is the energy of the people that has pushed this art form forward. Have you ever seen a steel band performance or watch a person play pan? The energy and vibes exudes from the players. They feel the music like no other, the whole body moves; it’s as if they are swimming in a sea of music and bathing its rhythm.

My mother and father met in a pan yard. And I was a carnival baby; born 9 months after carnival of 1977. So pan is in my blood. My earliest experiences of pan was with the Blue Diamond Steel Orchestra from the heart of the nation’s capital on George St, Port of Spain. I remember the excitement and rush of adrenaline crossing the stage for the first time. My little 8-year-old self, pushing the stand that carried the pans and pannists. And although I was not playing in the band at that time, I truly believed that I was an integral part of the whole performance on stage. You see, pan was in my DNA and this is no different for many Trinis.

Consider that 99% of the people playing pan cannot read sheet music. They can’t tell the difference between a sharp or a flat. Instead, music runs through their veins; music is in their DNA. And it flows from their fingertips to the sticks and onto the steelpan. The energy of the music combined with the energy of the people creates an explosion of rhythm.

Here’s an explosive piece by Silver Stars at Panorama Finals, 2010; you can see and feel the energy of steelpan music.

Steelpan is Culturally Significant to Trinidad and Tobago

The steelpan is Trinidad and Tobago’s national instrument and has become a huge part of the country’s culture. It plays an integral role in Trinidad’s Carnival, and indeed all of the Caribbean.  Steelpan can be considered a Caribbean instrument.

When the steel band movement came to fruition in the 1950s, the now art form was controversial and under attack.

As steel bands arose from the lower classes, there were often steel band riots caused by clashes between bands on the road and during Carnival. These violent outbreaks were unacceptable to the middle and upper classes who saw the opportunity to put a stop to the steelpan once and for all.

These claims were eventually put to bed by those who loyally defended the steelpan. TASPO was also a result of these steel band riots as it demonstrated unity among members from different steel bands and gave the steelpan an international stage. 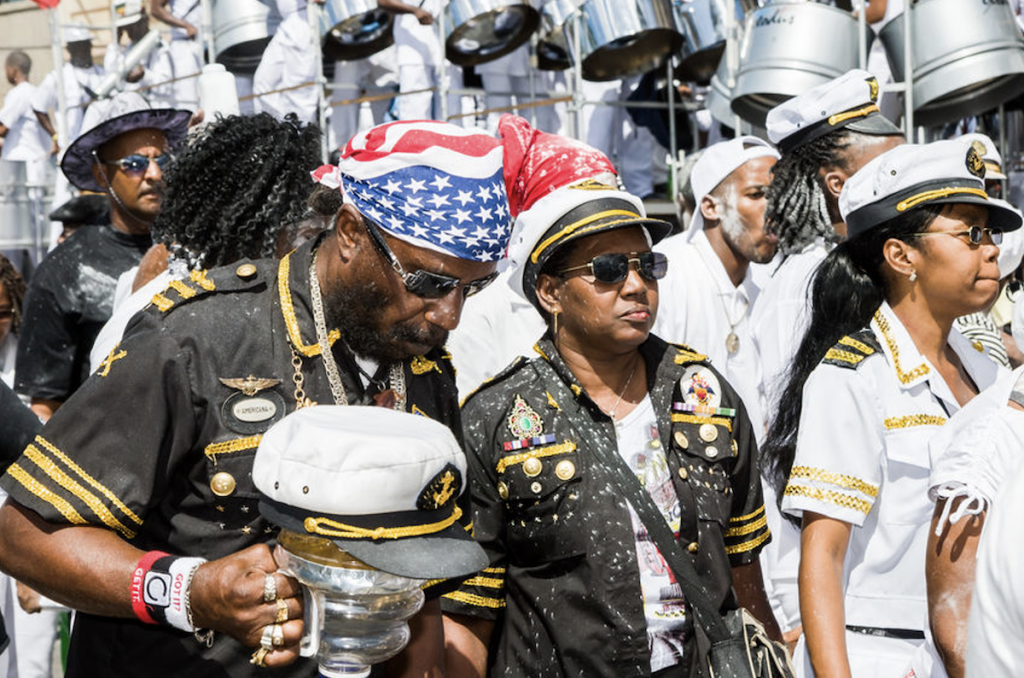 From its inception, steelpan has had a role in Trinidad and Tobago’s Carnival. In the early 1960s, the first ever national Panorama was held. This is an annual steelpan competition where steel bands would perform a popular calypso/soca music on the steel orchestras.  Desperadoes won the most panorama titles with twelve titles under their belt. Steel bands consist of members both young and old, but it is the love for music that truly shines forth in these performances.

If you’re ever searching for me on Carnival Monday or Tuesday, look for a steel band on the road, you’re bound to find me there ‘chipping’ and dancing in trance-like revelry, following the steel band through the streets of Port of Spain.

Even though Trinidad and Tobago has made the steelpan its national instrument, the twin-island republic has missed many opportunities when it comes to this indigenous instrument that is the steelpan. The steelpan was not patented, not trademarked and definitely was not effectively capitalized, customised or commercialized to cater to the international markets.

Some may also argue that the steelpan should be part of the National School curriculum. We should be teaching the future of our nation this artform. The artform of steelpan tuning is also a skill that should be passed down. Who will carry on our legacy if we do not make these changes as a country. 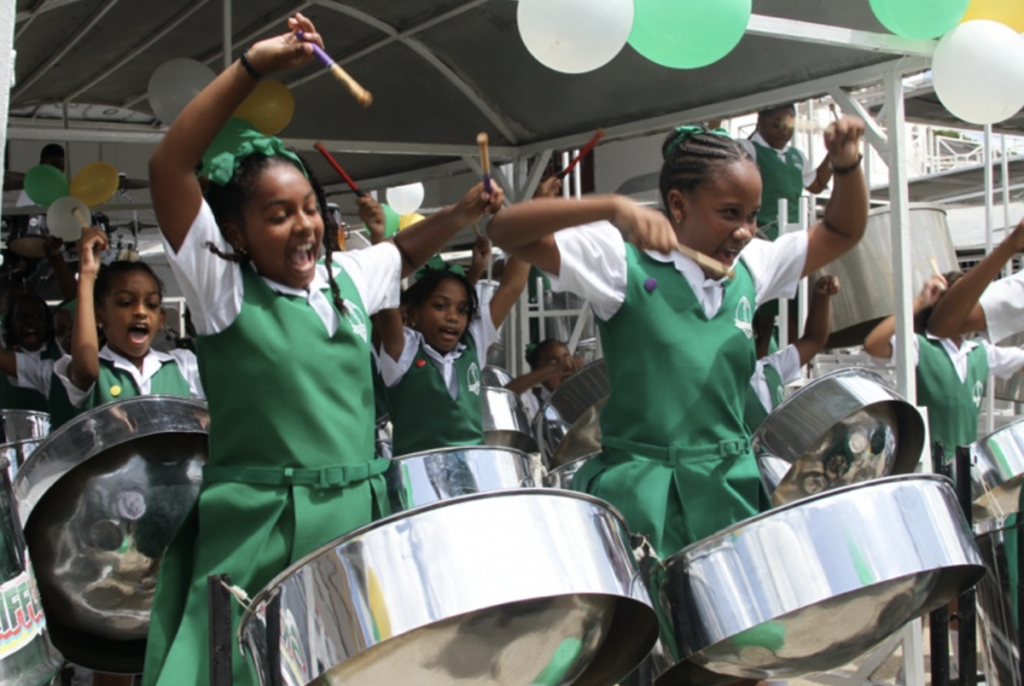 Steelpan – The Centre Stage for Tourism

Customers are interested in what locals do – they want to experience what locals experience, eat where they eat, go to local bars and cultural events that are locally-oriented.  It is in this context that the pan takes centre stage as a cultural and tourism attraction that caters exactly to what the ‘new traveller’ is looking for.  They’d want to know the story behind the pan – how it was formed, where it is played, they’d want to visit the pan yards and interact with the pannists and even play a few notes and learn the right moves.

And if you ever visit Trinidad for carnival come look for me in a steelpan section and we’ll take a drink together.

Here’s one of my all-time favourite pieces, it’s a classic – Pan in A Minor by Renegades, performed live. I was 10-years old at the time and was most likely somewhere in the crowd with my father:

Listen to the Versatile Steelpan.

Here’s a selection of Steelpan performances of music from around the world. Enjoy!​

Trinidad All Stars
A Medley of World Music 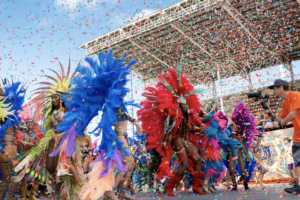 Trinidad is an Exceptional Caribbean Island. Feel Our Energy! 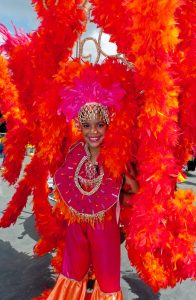 Trinidad Carnival is the Greatest Show on Earth! Here’s Why.

2 thoughts on “The Steelpan is Truly Caribbean – Hear its Amazing Story.”